Super Sunday at 2018 World Cup as Brazil, Germany and Mexico take to the pitch 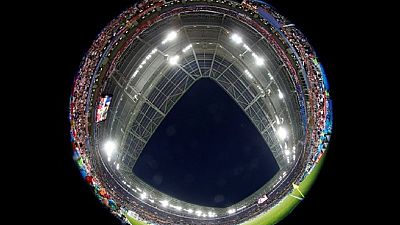 The day will kick off with the opening match of Group E as Costa Rica takes on Serbia.

2014 world cup quarter finalists Costa Rica will employ the defensive excellence that saw them beat Italy and Uruguay four years ago, to take on a Serbia side who will be relying on in form striker Aleksandar Mitrovic to continue the streak that saw him net a hat-trick in their last warm up game against Bolivia.

If we are going to play in a neutral stadium, with everything that is around the World Cup then I think Mexico can win against Germany.

Reigning world champions will then take to the Luzhniki Stadium, playing against North American side, Mexico, whom they drubbed 4-1 in the Confederations Cup last year.

Mexico’s coach Juan Carlos Osorio is however not afraid of a repeat of that embarrassing defeat, telling the fans they will be proud of their team.

“We will play good football, attractive football, you will see a great match and feel good about your team,’‘ Osorio said after Mexico’s training session on Saturday.

Despite the fact that Germany have only lost once in 11 meetings against Mexico, Osorio believes it will be different at this year’s World Cup.

“If we are going to play in a neutral stadium, with everything that is around the World Cup then I think Mexico can win against Germany,” he said.

The Germans have a stellar tournament record that includes at least a semi-final spot in every World Cup since 2002.

Brazil, on the other hand, who were on the receiving end of a humiliating 7-1 defeat at the hands of Germany in the 2014 World Cup semi-final, will be up against a stubborn Switzerland said.

While Brazil have recovered to come to Russia with a record of 17 wins, three draws and one defeat in e last 21 games, Switzerland have an equally impressive record.

Brazil’s coach Tite is well aware of the Swiss threat.

“They are a team that defends with two lines. They have speed in attack. Out of all the teams we are facing, they are the strongest in depth,” Tite told a news conference on Saturday.

SUGGESTED READING: Guide to Africa’s World Cup: Will An African team go all the way in Russia?