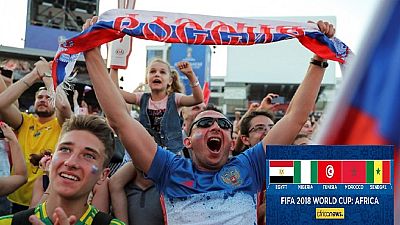 The first day of the 2018 World Cup belonged to the host Russia who stunned Saudi Arabia, putting five unanswered goals past the Asian side.

Coming after a nine month winless run, the win was particularly sweet for the Russian side that was under pressure to perform in a group that also has African side Egypt and South America’s Uruguay.

After an elaborate opening ceremony whose highlights were a performance by British popstar Robbie Williams, a lengthy speech from Russian president Vladimir Putin and a short speech from FIFA president Gianni Infantino, it was time for business on the pitch.

We are not getting ahead of ourselves. We saw that we are on the right track but we should forget this game and concentrate on the next one.

The hosts quickly claimed the first goal of the 2018 FIFA World Cup with Yury Gazinsky scoring a brilliant header in the 11th minute.

The Russians were quickly forced to make the first substitution of the tournament in the 25th minute after Alan Dzagoev went down with a hamstring injury.

The substitute, Denis Cheryshev proved to be quite the revelation scoring the first ever goal by a substitute in a World Cup opening match before the stroke of halftime.

The Villareal player was to add a brilliant second in the last minutes of what turned out to be a dramatic opening match.

Another substitute, Artem Dzyuba, scored a powerful header from an Aleksandr Golovin’s right wing cross in the 71st minute.

Golovin himself wrapped the business of the day, smashing in a free kick with the last action of the game.

Cheryshev edged Golovin to become the first Man of the Match at the tournament the country he calls home is hosting for the first time.

The memorable 5-0 win in an opening game by the hosts equaled the previous record held by five time World champions Brazil, who beat Mexico by the same margin in Geneva in 1954.

The Russian president who watched the game was quick to congratulate coach Stanislav Cherchesov.

“We are not getting ahead of ourselves. We saw that we are on the right track but we should forget this game and concentrate on the next one,” Cherchesov said after ending a seven-game winless run in emphatic style.

Saudi Arabia on the other hand have now lost now lost eight and drawn two of their last 10 World Cup matches, will be desperately looking to restrategise before they take on group favorites Uruguay next week.

Russia will comfortably watch Egypt take on Uruguay on Friday, before they can also have their opportunity to play agaisnt fan favorite, Mohamed Salah.