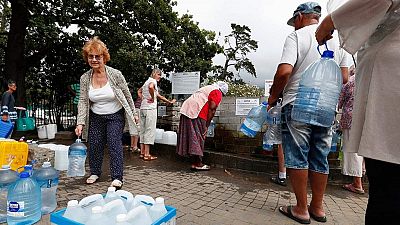 Dam levels have risen to 31.5 percent as of this week compared with just 21 percent the same time a year ago, said Rashid Khan, regional head at the water and sanitation department.

The drought has ravaged crops, hit tourist numbers and forced changes to consumption habits in Cape Town and surrounding areas as mandatory water restrictions were implemented.

We urge water users - domestic and industries - to continue using water sparingly,” he said, adding that it was too soon to ease a limit of 50 litres a day for domestic users, which has helped to halve consumption since 2016.

But Khan said the region was not out of the woods yet.

“We urge water users – domestic and industries – to continue using water sparingly,” he said, adding that it was too soon to ease a limit of 50 litres a day for domestic users, which has helped to halve consumption since 2016.

Cape Town, which has some 4 million inhabitants, gets most of its tap water from dams filled mainly with rainwater.

Day Zero will be the start of active water rationing. As far as possible, drinking water will continue to be supplied to some critical areas. These will include strategic commercial areas, high-density areas with significant risk of increased waterborne disease such as informal settlements, and critical services like hospitals.

But water will be cut off to residential taps and large numbers of households and businesses will be unable to access drinking water in their homes and places of work. People will be forced to go to collection sites across the city to fetch water.

Meanwhile, city authorities intend to maintain sewerage systems with minimal flow by injecting water into the pipelines. It also means that a portion of water collected from the distribution points will have to be used, for example, to flush toilets.

In Phase 2 the plan is to roll out distribution points across the city. This will be impractical and hugely challenging at the very least. Site selection is unlikely to be evenly distributed across the city because distribution sites will depend on existing water pipelines.