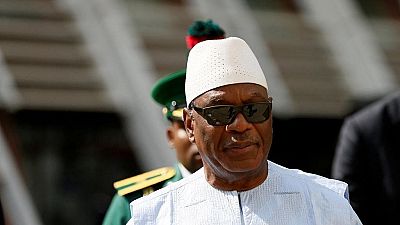 Thousands of Malians marched through the capital Bamako on Friday against President Ibrahim Boubacar Keita, who will seek re-election next month.

A similar protest last Saturday was broken up by riot police firing teargas but this time the demonstrators, blowing horns and waving Malian flags, marched without incident from Place de la Liberté toward Place de l’Independence about 1.5 km (1 mile) away.

“The people have come out to say no to five years of incompetence, of bad management, of carelessness, five years of predation of resources,” said opposition leader Tiebile Drame, who is managing former finance minister Soumaila Cisse’s campaign. “The people want change.”

The people have come out to say no to five years of incompetence, of bad management, of carelessness, five years of predation of resources.

Keita won a landslide victory over Cisse in a 2013 election, the first after a 2012 coup d’etat and a temporary takeover of northern Mali by Tuareg militia and al Qaeda-linked militants.

Rising violence across Mali, including jihadist attacks and tit-for-tat ethnic killing in the north and centre, has raised doubts about the feasibility of holding the July 29 vote in some parts of the country.

Keita’s opponents fear the government will use security concerns as a pretext to close polling stations in opposition strongholds, something the government denies.

“It’s our right for all of us to ensure that the elections are transparent,” said Mohamed Bathily, one of more than two dozen presidential candidates in the race. “(Keita’s party) put into the (electoral) law the conditions for fraud.”

According to a U.N. report this week, armed groups carried out 44 attacks between March 20 and May 30, killing dozens of civilians, Malian troops and U.N. peacekeepers.

The violence has spawned a humanitarian emergency with 4.3 million people expected to be food insecure between now and October and almost 1 million in need of emergency food assistance.