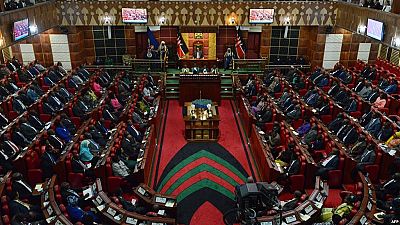 A Kenyan parliamentary committee has cut funding for the state-run National Youth Service (NYS) after two corruption scandals there, the committee’s chairman said on Thursday.

Dozens of senior officials and business people are being held in custody and face charges related to the theft of nearly $100 million from the youth agency.

Kimani Ichungwah, the chairman of the influential budget committee in the national assembly, told Reuters they had cut the proposed budget for the agency for the financial year starting next month by 8 billion shillings ($79.40 million) to stem the rampant theft of funds.

We will just ensure even for NYS we give them money to continue with ordinary operations but not excessive budgets which could be subject to abuse.

The state-run NYS trains young people and deploys them to projects ranging from construction to traffic control. The Treasury had proposed to allocate 18.36 billion shillings to the agency to fund its programmes for the 2018/19 fiscal year.

“Any ministry department or state agency that is subject to investigation for misappropriation of public funds, we will ensure that we take measures so that we don’t give them more money to steal,” Ichungwah said.

“We will just ensure even for NYS we give them money to continue with ordinary operations but not excessive budgets which could be subject to abuse.”

The current scandal follows one three years ago at the same agency. Earlier this year, a court acquitted nearly two dozen NYS officials of charges related to the alleged theft of 48 million shillings in 2015.

In 2016, the then-head of Kenya’s anti-graft agency said Kenya was losing a third of its state budget the equivalent of about $6 billion to corruption every year.

While the finance ministry disputed the losses were that large and instead blamed poor accounting, Kenyan President Uhuru Kenyatta acknowledged that corruption had reached levels that threatened national security.

He has vowed to fight graft in his second and final term and has unveiled a range of measures including compelling officials who work in government procurement departments to take lie detector tests.

Ichungwah said his committee had also lopped 450 million shillings from the proposed allocation to a government programme for planting trees in schools, which he said had already gobbled up 2 billion shillings.

Parliament has to adopt the recommendations of Ichungwah’s committee before they can take effect.