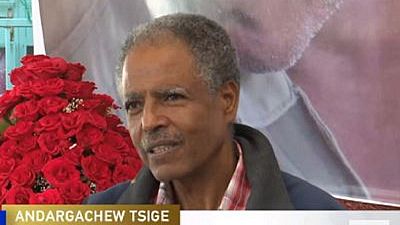 Recently freed Ethiopian political prisoner, Andargachew Tsige, says he may be free physically but the complexities of the country’s politics was weighing him down mentally.

Tsige who also holds British citizenship is the latest high-profile prisoner to be released under political reforms being carried out by Addis Ababa.

In an interview with the CGTN Africa network barely two days after his release, he addressed issues relating to life in prison, his certainty that the government was not going to execute him despite being on death row and what next after his release.

Well, yes, I am a free man, I mean physically I can move around but mentally you know you are overweighed by the complexity of the problems the nation is facing.

On Wednesday, he met with Prime Minsiter Abiy Ahmed. According to Fitsum Arega, chief of staff to the PM, the meeting was to to thank government for the decision to pardon him.

Andargachew Tsgie met HE PM Dr Abiy Ahmed today to express his gratitude for the government’s decision to grant him pardon. pic.twitter.com/nIEgaE5PHU

Below is a transcript of what he told the CGTN Africa reporter.

If you have an objective, an aim, a cause, the details of prison are not that important. What happened there is a prison life, a bit different from other prisoners because I was secluded.

There were a lot of restrictions in terms of visits. Healthcare, other amenities and about services. But mentally (you know) I was prepared not only for prison … including death, because I knew from the beginning the struggle that I was engaged in will not be easy.

How did it feel in prison?

I knew it will be very difficult for the government really to take into practice the death penalty because I will be probably the first one (person) who will be executed for political reasons, so it will be a very politically damaging.

So in some way I had my suspicion that it will not be carried out so that did not bother me very much, so I didn’t dwell on it.

Well, yes, I am a free man, I mean physically I can move around but mentally you know you are overweighed by the complexity of the problems the nation is facing.

When I was in prison I realized that the problem was more complex than I thought. So really, the freedom that I have now, doesn’t mean really much. It’s just a physical freedom but mentally, there are a lot of things to do, there are a lot of issues that burdens you, with my colleagues and with the entire population.

Because it is the issue of what the population wants to see being practiced in Ethiopia, so we will continue to fight for the formation of independent insitutions, that is what I am going to do.

Well, it’s a good beginning, I have said already to others who interviewed me, we don’t really have really an addiction for opposition, we oppose because there are issues that need opposing. If someone is doing the right thing, who will be opposing it, in fact we will collaborate.

Andargachew Tsege, the British citizen who spent four years on death row in Ethiopia as a political prisoner, addressed crowds in the capital Addis Ababa last night after his release. https://t.co/WdOjcYvzUD https://t.co/Ox8KigxnsO