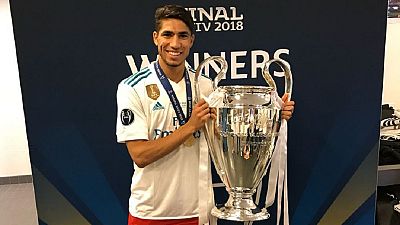 <p>Two African players missed out on a Champions League winners medal but another one made history becoming the first to win it from his country.</p> <p>The unfortunate duo – Liverpool’s Mohamed Salah (Egypt) and Sadio Mane (Senegal) made the news during their club’s <span class="caps">UEFA</span> Champions League (<span class="caps">UCL</span>) final loss against Real Madrid in Kiev on Saturday evening. Salah got injured early on and mane equalized to become the first Senegalese to score in a Champions league final.</p> <p>Africa, however, had one winner on the part of Real Madrid in the person of Achraf Hakimi. The 19-year-old Spanish-born Moroccan plays for Real usually at the right back position but also as a central defender.</p> <p>He described winning the <span class="caps">UCL</span> as a dream come true on his Twitter account as he posed with the trophy after the game. He is the first Moroccan to win the trophy. He is also included in the Atlas Lions team heading to the World Cup.</p> <p>Liverpool’s woes on the night started with an injury to Salah – the club’s best player for the season. It is unclear if the shoulder injury from a clash with Real’s Sergio Ramos will hinder his participation at the upcoming World Cup in Russia.</p> <p>Karim Benzema scored Real’s opener whiles Sadio Mane equalised for Liverpool. The result was sealed with two strikes from substitute Gareth Bale, including a sensational overhead kick, to seal a 13th European Cup win overall and the Madrid side’s fourth title in five years.</p> <p><img src="https://static.euronews.com/articles/47/17/471733/1024x576_bonus-RealMad.jpg" alt="" /></p> <blockquote class="twitter-tweet" data-lang="en"><p lang="en" dir="ltr">4 – Sadio Mané ?? is only the 4th African player to score in a European Cup/Champions League final after:<br /> <br /> ?? Rabah Madjer<br /> <br /> ?? Samuel Eto'o<br /> <br /> ?? Didier Drogba<br /> <br /> Diamond. <a href="https://twitter.com/hashtag/UCLfinal?src=hash&ref_src=twsrc%5Etfw">#UCLfinal</a> <a href="https://twitter.com/hashtag/RMALFC?src=hash&ref_src=twsrc%5Etfw">#RMALFC</a> <a href="https://twitter.com/LFC?ref_src=twsrc%5Etfw"><code>LFC</a> <a href="https://t.co/hZBEFpHr6g">pic.twitter.com/hZBEFpHr6g</a></p>&mdash; OptaJean (</code>OptaJean) <a href="https://twitter.com/OptaJean/status/1000466814457954304?ref_src=twsrc%5Etfw">May 26, 2018</a></blockquote> <script async src="https://platform.twitter.com/widgets.js" charset="utf-8"></script>