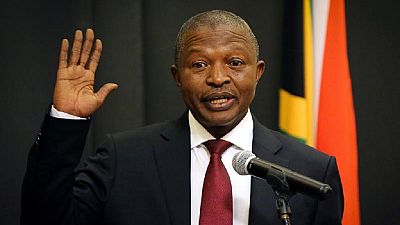 The party imputed that he was seeking medical attention in Russia and asked government to come clean on the true mission of David Mabuza outside the country.

An EFF press release said the last that had been heard of the deputy president was that he had traveled to Russia as a special envoy.

It has been two weeks since it was reported that he is on an envoy, yet there are allegations that Mabuza is actually not on a state visit, but in hospital.

Reports in the local media had stated that he was going to Russia crucially on discussions to do with a nuclear deal that the Zuma-led government was entering into.

It has been two weeks since government reported that DD Mabuza is in Russia on a special envoy. Where are the images? What is the agenda or purpose of his visit and why is it taking two weeks? When will he be back? #Siyabuza #WhereIsDDMabuza #MissingAdultAlert – RT for awareness. pic.twitter.com/Q5dkOjhlCj

“It has been two weeks since it was reported that he is on an envoy, yet there are allegations that Mabuza is actually not on a state visit, but in hospital.

“Ramaphosa ought to be honest to the nation because there is no report or even pictures of Mabuza’s visit. It is both a constitutional and a moral obligation for the public to know.

“This basic moral sense would be obvious to any man with a conscience, presiding over the highest office in the land. Mabuza is in Russia, on taxpayers’ money, yet we have no report on what the envoy is about and what has it been up to over the last two weeks,” the statement read in part.

Mabuza is occupying the position Ramaphosa held under immediate past Jacob Zuma. Ramaphosa was elected at the ruling African National Congress (ANC) conference to lead the party. Zuma, whose mandate ends in 2019 was forced out in order not to have two centers of power in the party.

The EFF is South Africa’s third biggest party in parliament, behind the ANC and the Democratic Alliance (DA). The party is led by a former youth leader of the ANC, Julius Malema. The 2019 elections will be their first participation in presidential elections.