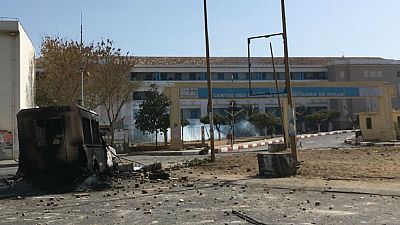 Senegalese President Macky Sall on Saturday sacked two university officials following students protests that led to the death of one student as they clashed with police.

The rector Baydallaye Kâne and director Ibrahima Diao of the University of Gaston Berger (UGB) in Saint-Louis were replaced by Ousmane Thiaré and Papa Ibrahima Faye, according to a presidential decree published on Saturday.

Second-year student Mohamed Fallou Sene aged 25, was killed after police were called in to quell a protest at the university, as they staged a demonstration over late grant payments.

New clashes between students and law enforcement officers erupted at several universities across Senegal the day after a second-year student Mohamed Fallou Sene, 25-years-old, was killed during a protest about late grant payments.

The death sparked further protests on Wednesday near the University Cheikh Anta Diop in the capital Dakar.

Prosecutor Ibrahima Ndoye said Wednesday that an autopsy had found Sene “died from a gunshot wound”.

There were also protests at universities in the cities of Bambey and Thies, and a main higher education union began a strike in solidarity with the students.

Tear gas was deployed at demonstrations in the southern city of Ziguinchor, a police source told AFP. Several public buildings in the city were ransacked, local press reported.