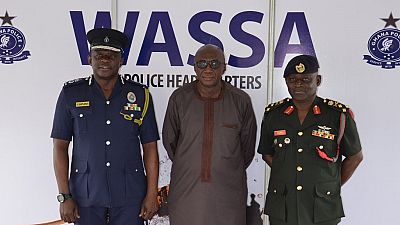 Reports of bloody clashes between police and military in Ghana’s northern region has been condemned by the Police Service and the Armed Forces.

Photos in the local press on Wednesday, May 16, 2018, showed a police officer bleeding after the said incident. State broadcaster, GBC, quotes a security expert, Adams Bonah, as describing the incident as embarrassing and unwarranted given the separation of roles by each outfit.

The reports largely claim the military personnel used undue force on the police who were carrying out their constitutional mandate of maintaining law and order. The Interior Ministry has announced a probe whiles the parliament has strongly spoken against the incident.

To continue to collaborate in investigating the clash and similar existing cases and officers found culpable to be sanctioned in accordance with law.

In a joint statement issued on May 17, following a meeting between their respective High Commands, the Police and Military condemned in no uncertain terms the clash that took place in Tamale, capital of the Northern region.

Among the resolutions arrived at were the setting up of Police and Military memberships in all regions that host military bases, ‘for the purposes of overseeing the peaceful co-existence of both services,’ the statement read.

It also pledged to deal with officers who are found to have engaged in acts of indiscipline by failing to obey their chain of command.

The two bodies are ‘to continue to collaborate in investigating the clash and similar existing cases and officers found culpable to be sanctioned in accordance with law,’ the statement added.

Reports indicate that a joint meeting had been held in April this year to prevent the occurrence of such a clash with that meeting’s resolutions being implemented at the time of the latest clash. The statement, however, reassured the public of adequate security in the general scheme of events.

A pressure group in the country, Occupy Ghana, has also called for swift action against the military personnel in an act they say dents Ghana’s image.

“Occupy Ghana is extremely concerned and say we are disgusted at the criminal assault reportedly inflicted on Police Officers by element of the Arm Forces in the Tamale Metropolis in the northern region”.