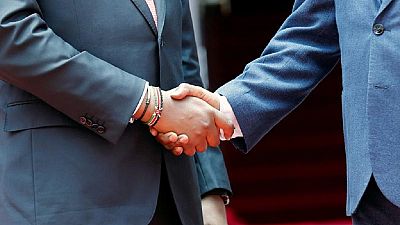 Embattled Kenyan lawyer and opposition figure Miguna Miguna has averred that a peace handshake by President Uhuru Kenyatta and former Prime Minister Raila Odinga, had left the country without an opposition.

Miguna subsequently declared that the new Kenyan opposition was the National Revolutionary Movement of Kenya (NRMKe) of which he has been named ‘General.’

According to him, the main opposition Orange Democratic Movement (ODM) led by Raila Odinga was now part of the ruling Jubilee party.

We will and must march on until we defeat those trying to institutionalize the culture of impunity. We must establish a merit based democratic society.

“NASA (National Super Alliance) is dead and with ODM having essentially joined Jubilee, the NRMKe (National Revolutionary Movement Kenya) is the new Kenyan opposition. We will and must march on until we defeat those trying to institutionalize the culture of impunity. We must establish a merit based democratic society,” he added.

Miguna’s views were contained in a Facebook post announcing that he had postponed an anticipated return to the country. He tasked opposition faithful to use all means necessary to push for needed change in the country, among others; processions, sit-ins and hunger strike.

NASA was a four-party opposition coalition that failed to wrestle power from the ruling Jubilee party in 2017 elections. The coalition successfully got the Supreme Court to nullify results of the presidential poll.

NASA included Odinga’s ODM, WIPER, FORD-Kenya and Amani National Congress (ANC). The other three leaders of NASA were absent at the mock swearing-in of Odinga sparking talk of a split in NASA front.