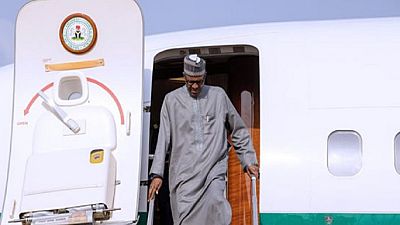 Nigerian President Muhammadu Buhari has returned to Abuja from London after a successful routine medical check-up.

Reports have it that the president who arrived Nigeria on Friday had initially planned to return on Saturday but decided to reduce his stay in the UK by a day.

The presidential aircraft conveying him and some of his aides landed at the presidential wing of the Nnamdi Azikiwe International Airport Abuja at about 7.00 p.m local time.

The Minister of Federal Capital Territory, Alhaji Muhammad Bello and a representative of the Inspector-General of Police, Ibrahim Idris, were at the airport to receive him.

The Chief of Staff to the President, Malam Abba Kyari was among other government officials that received him. Buhari departed Abuja for London on Tuesday for the routine medical check-up.

And since being elected in 2015, Muhammadu Buhari has traveled to the UK for health reasons on a number of occasions.

Trips that still have not pleased Nigerians who have often called for the resignation of the president.

He promised, among other things, to disable the Islamist sect Boko Haram, whose attacks and suicide bombings have claimed thousands of lives while displacing more than 2.6 million people since 2009.

President Muhammadu Buhari has declared his intention to seek re-election in the 2019 presidential election.