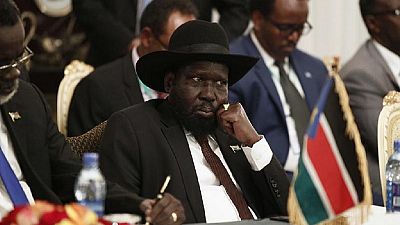 South Sudan’s government urged the United States on Wednesday not to “abandon” the country after Washington said it would review its assistance programs because it could not continue a partnership with leaders perpetuating “endless war”.

“We are asking the United States not to abandon this country (South Sudan) because we need them … their role to assist the population of South Sudan is crucial and cannot be ignored”, said foreign affairs ministry spokesman Mawien Makol Ariik.

The United States is the largest donor of humanitarian assistance to South Sudan, which has been in the throes of a civil war since late 2013 that has displaced around a third of the 12 million-strong populaton and killed tens of thousands of people.

In a sharply worded statement on Tuesday the White House said the United States was a “proud and hopeful supporter” of South Sudan when it gained independence in 2011.

“Seven years later, the leaders of this country have squandered this partnership … killed their own people, and repeatedly demonstrated their inability and unwillingness to live up to their commitments to end the country’s civil war.”

The U.S. funding provides aid to millions of South Sudanese refugees in Uganda and lifesaving assistance such as food to people still inside the war-torn country.

Washington’s statement says the United States is committed to saving lives but does not want its assistance to “prolong the conflict” or facilitiate corrupt behavior by elites.

Producton in some of South Sudan’s oil fields has been shut down due to the conflict, but the government says around 130,000 barrels per day of oil are being produced. Juba spends well more than half ifs budget on weapons and paying soldiers, according to U.N. experts.

Washington should “reconsider whatever harsh matter they are taking against this country”, Ariik told Reuters.

The government led by President Salva Kiir is fighting a war with a number of rebel groups, some of them loyal to former vice president Riek Machar, who is under house arrest in South Africa.

The warring parties signed a ceasefire in December in the Ethiopian capital, but it was violated within hours. A new round of talks is scheduled to begin later this month after delays, but there is little hope among diplomats it will end the war.

“The Government of South Sudan has lost credibility, and the United States is losing patience,” the White House declared.