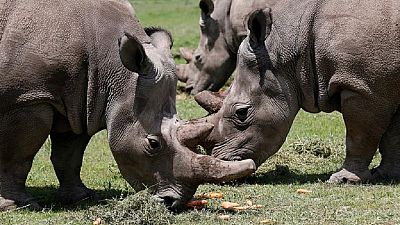 Three rhinos were found dead with their horns missing in Kenya’s Rhino Sanctuary in Meru National Park on Wednesday in what the country’s Ministry of Tourism is calling an act of poaching.

The incident happened at around 6.30pm, where security at the sanctuary heard gunshots and rushed towards the direction of the sounds but failed to see the suspected poachers.

“A thorough search, both aerial and ground was conducted on first light where carcasses of two adult rhinos and a calf were found with the horns missing,” the Ministry of Tourism and Wildlife said in a statement.

No sign of the gang was reported, but our teams, both covert and overt, are in hot pursuit with good leads.

“No sign of the gang was reported, but our teams, both covert and overt, are in hot pursuit with good leads.”

Poaching is a big problem in the East African nation but government efforts have reduced rhino poaching by 85 percent and elephant poaching by 78 percent from its peak in 2013 and 2012, the ministry said. In 2017 Kenya lost sixty nine elephants and nine rhinos.

Separately on Thursday, six rhinos were to be flown from South Africa to the central African nation of Chad to reintroduce them to a country where they had been locally extinct for decades.