Malawi's Banda says she has evidence of political witch hunt 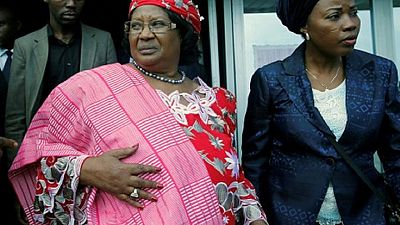 Malawi’s former president Joyce Banda said Monday she had evidence that corruption allegations against her were politically motivated as she left the door open to another presidential run.

Banda, 68, flew home on Saturday after four years of self-imposed exile during which she faced the threat of arrest over corruption allegations in the biggest financial scandal in the country’s history.

Banda fled in 2014 when she lost power after being embroiled in the so-called Cashgate scandal, in which government officials siphoned off millions of dollars of public money.

“This is not a matter I would want to discuss now. But I just want you to know that this matter is political,” she told AFP at her home in Zomba, southern Malawi.

“I don’t think, I know. I have got evidence to that effect.”

Banda, only the second woman to have led a country in Africa, was greeted by hundreds of supporters of her People’s Party (PP) when she arrived at Blantyre airport.

“Mother is here, the lights should come back,” the crowd chanted.

Asked whether she plans to contest the presidency again, Banda had this to say,

“I am back, what do I do? Do I step aside and allow younger people to take over? Do I stay? That has to be discussed in my party,” she said Monday.

“Before going to any election, every party holds a convention, and it is (down to) the people if they want the person to stand again.”

Local media have reported a possible deal between President Peter Mutharika and Banda ahead of next year’s elections.

Banda founded the PP in 2011 after splitting from the Democratic Progressive Party, which is led by Mutharika.

Will Banda be arrested?

Police spokesman James Kaledzera last week declined to say if Banda would be arrested, though he confirmed that a warrant issued last July remained valid.

Earlier this year, the Malawi Anti-Corruption Bureau (ACB) said it had no solid evidence against the former president, partially clearing her name.

The “Cashgate” scandal prompted foreign donors — who provide around 40 percent of Malawi’s budget — to pull the plug on aid worth around $150 million.

Ministers, civil servants and businessmen are accused of pocketing money from government coffers through ghost companies which did not provide any services to the state.

The scandal helped push Banda out of power in the 2014 election, and Mutharika vowed to clean up the system to bring donors back.

Malawi, one of the world’s poorest and aid-dependent countries, will hold presidential, parliamentary and local council elections in May 2019.