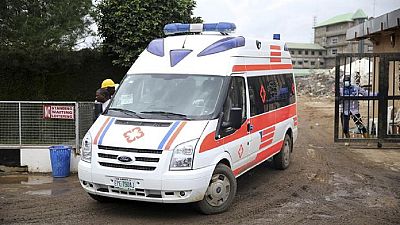 Parents of the abducted Chibok Girls were involved in a fatal accident along Song-Yola road in Adamawa, North East Nigeria, with one reported dead while 17 others were critically injured.

A spokesperson for the parents group, Ayuba Alamson told Africanews that the parents were on their way to attend a meeting with teachers at the American University of Nigeria (AUN) Academy,in Yola, when the incident occurred.

‘‘They were on their way to visit our daughters and also attend PTA meeting at AUN.
But very sad to note that, at about 10:00 AM, local time one of the vehicles had a fatal accident in Song,’‘ Alamson said.

Alamson explained that the accident happened when one of the vehicles in which thye parents were travelling, had a head on collision with a heavy duty grading vehicle, at a place where road repair works were ongoing.

He also confirmed the death of one parent and fatal injuries to 17 others.

‘’ It is very traumatic, we have continued to lose parents since the abduction saga. We have since lost up to 20 of the parents, so we don’t want lose any one of us in this situation again.’’

While condoling the Chibok parents, AUN founder and and former vice president, Atiku Abubakar said ‘his prayers are with the family of the deceased and the injured’.

‘‘I’m saddened to hear the parents of #ChibokGirls studying at AUN Academy were involved in an auto accident on their way to a Parents-Teachers meeting in Yola, with one fatality and over a dozen injured.My prayers are with the families of the deceased and the injured,’‘ the politician tweeted.

I’m saddened to hear the parents of #ChibokGirls studying at AUN Academy were involved in an auto accident on their way to a Parents-Teachers meeting in Yola, with one fatality and over a dozen injured.

My prayers are with the families of the deceased and the injured.

Over 200 school girls were abducted by insurgent group Boko Haram from their boarding school in 2014.

Their abduction birthed the advocacy group Bring Back Our Girls who continue to pile pressure on government to rescue the remaining girls.

While some girls have been released after negotiations with the government and are studying at AUN on scholarships, over 100 girls are still missing and unaccounted for.