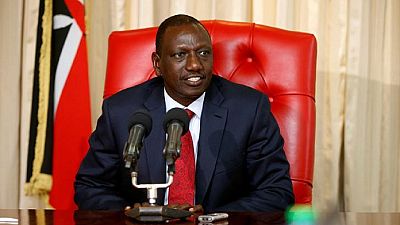 Kenya’s deputy president, William Ruto, has criticised a campaign by the opposition to push for a referendum that would create positions for its leaders including Raila Odinga.

Addressing a congregation in Nakuru, on Sunday, Ruto said its unfair to put Kenyans in campaign mood just a few months after the dramatic 2017 elections.

“Talking of amending the constitution right now in order to create other political positions is to lack respect for the electorate,” he told the congregation.

He maintained that the government should be granted a conducive environment to implement the campaign promoses and development agenda, rather than be sidetracked by ‘politics of power games’.

Politicians from Odinga’s party and the opposition National Super Alliance coalition (NASA) have been agitating for a referendum to create positions of prime minister and deputies within the country’s constitution.

They argue that the reconciliatory handshake between Odinga nd president Uhuru Kenyatta necessitates the need to accomodate the opposition into government.

Since the handshake with Kenyatta, Odinga has met Kenya’s two former heads of state, Daniel Arap Moi and Mwai Kibaki, fuelling speculation on succession politics ahead of 2022.

I called on Retired President Mwai Kibaki and it was good to see him in very high spirits. We discussed the current state of our nation and exchanged ideas on how best we can forge ahead in unity as a people. pic.twitter.com/YxEF82Rnbg

The meetings have been met with suspicion from both Odinga’s colleagues in the opposition and Ruto’s camp who have agreements to be endorsed for the presidential race in 2022.

The meetings featured Moi’s son, Senator Gideon Moi, Kibaki’s son, Jimmy Kibaki and Kibaki’s nephew, Governor Ndiritu Muriithi, who are all seen as potential candidates for the highest office in the land.

President Kenyatta is expected to explain details of the unity deal with Odinga on May 2 when he delivers the State of the Nation address.

In the meantime, it’s politicking and lobbying by politicians eyeing the 2022 succession race.