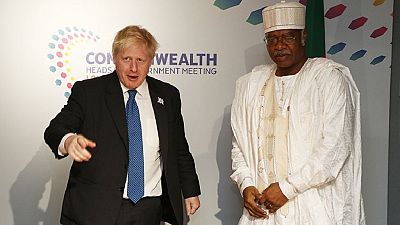 <p>The British Foreign Affairs Chief, Boris Johnson, has reiterated the United Kingdom’s call for dialogue in solving the political and security crisis in Cameroon’s Anglophone regions.</p> <p>Johnson’s views were made when he met Prime Minister Philemon Yang on the sidelines of the Commonwealth Heads of Government Meeting (<span class="caps">CHOGM</span>) in London.</p> <p>After holding what he described as important talks with the Premier who represented President Paul Biya, Johnson added: “Urgent need to pursue dialogue, decentralisation and respect human rights in Anglophone Regions as President Paul Biya has previously committed. “</p> <p>He stressed that the UK will support peace, prosperity and security for its friends in Cameroon. The Foreign and Commonwealth Office (<span class="caps">FCO</span>) has a security alert in place for the Anglophone regions – NorthWest and SouthWest – cautioning citizens against travel to those areas.</p> <p>The security situation in the region has been chaotic for the better part of this year in an armed confrontation that started in October 2017. Separatists under the banner of the so-called Ambazonia republic attempted to secede from Cameroon and were met with heavy security crackdown.</p> <p>President Biya is on record to have said that dialogue was the only way out but very little has been done in that respect. The last time dialogue came up, it was by Interior Minister Paul Atanga Nji, who stressed that the government was only going to speak with persons seeking a united country.</p> <blockquote class="twitter-tweet" data-lang="en"><p lang="en" dir="ltr">Important talks with Cameroon PM Yang at <a href="https://twitter.com/hashtag/OurCommonwealth?src=hash&ref_src=twsrc%5Etfw">#OurCommonwealth</a> summit. Urgent need to pursue dialogue, decentralisation and respect <a href="https://twitter.com/hashtag/humanrights?src=hash&ref_src=twsrc%5Etfw">#humanrights</a> in Anglophone Regions as <a href="https://twitter.com/PR_Paul_BIYA?ref_src=twsrc%5Etfw"><code>PR_Paul_BIYA</a> has previously committed. UK will support peace, prosperity and security for our friends in Cameroon <a href="https://t.co/YgkMDVRzoU">pic.twitter.com/YgkMDVRzoU</a></p>&mdash; Boris Johnson (</code>BorisJohnson) <a href="https://twitter.com/BorisJohnson/status/987013179023790081?ref_src=twsrc%5Etfw">April 19, 2018</a></blockquote> <script async src="https://platform.twitter.com/widgets.js" charset="utf-8"></script>