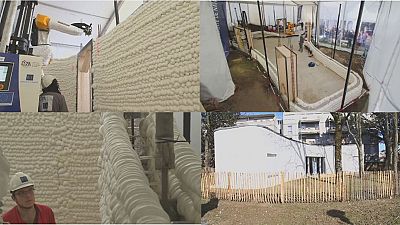 It is the first house built by a 3D printer in the world ,suitable for human habitation.Backers have hailed this move as a step forward in green construction.

The project was opened to the public in Western France on Saturday.

Professor Benoit Furet heads teams from the University of Nantes building the project.

The solution that we're offering is based on the principle that we come to construct the house on site, the foundations and the flooring are done and then the robot is brought in to print the walls. That's the first thing, we work on site.

“The solution that we’re offering is based on the principle that we come to construct the house on site, the foundations and the flooring are done and then the robot is brought in to print the walls. That’s the first thing, we work on site. The second thing is, we create both the structural part, what will give strength to the building and its mechanical resistance, and also the insulation at the same time. The principle is that we use insulation from the outside and the inside and the concrete part which is in the middle, which makes for an extremely effective wall “, Furet said.

The robot printer uses a special polymer material for the two outside layers of the building’s walls. This reduces waste and, when combined with the concrete inner layer, makes for extremely efficient insulation , upping its green credentials.

“Once you’ve printed the material you’ve used very little material, and produced zero waste. That’s also an argument for whether it’s ‘clean’ or ‘unclean’, there’s no waste, that’s important. And the other reason why we can say the material is good, is that this material once it’s laid down allows us to achieve efficiency in the house which means that the the wall is so insulating, that you’ll use very little energy to heat this house for 100 years “, he added.

The five-room house will be allocated to a family according to the usual criteria of social housing, with first tenants expected to move in June.

It is equipped with multiple sensors for air quality, humidity, temperature and acoustics enabling tenants to track the state of the building and save on energy bills in the long term.

Nantes council is also planning new projects in the area including a 350 square metre (3,767 square foot) public reception building, and a suburban housing estate with individual houses of different sizes and shapes.

Other projects are planned elsewhere in France such as a commercial structure of 700 square metres (7,535 square feet), along with a holiday centre including 80 homes in Mauritius.