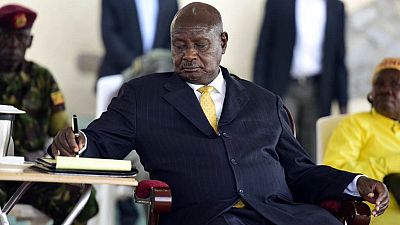 President Yoweri Museveni has reportedly reached out to the head of the Catholic church in Uganda over reports that the latter is behind a plot to overthrow the government.

State House said the president and the Archbishop of Kampala Catholic Archdiocese, Cyprian Kizito Lwanga, spoke over the phone on Monday and agreed on a way forward.

The discussion followed the archbishop’s remarks on Good Friday to a congregation at Old Kampala Playgrounds and at Rubaga Cathedral that an anonymous caller had said he was masterminding a plot to overthrow the government.

A statement from State House Monday evening indicated that the matters will be discussed and resolved in due course.

Archbishop Lwanga on Friday downplayed reports that he is plotting to overthrow President Museveni.

Dr. Lwanga’s comments were in reference to a phone call he received from an anonymous person indicating that the State had received information linking him to a plot to overthrow the government.

The caller reportedly told him that government had recruited informants within the church set up, who had given information to the president on the alleged plot.

Dr. Lwanga said a lot of misleading information is passed to the President by politicians, businessmen, civil servants, police officers, Internal Security Organization and the Chieftaincy of Military Intelligence (CMI) among others.

He said the anonymous caller warned him to be careful, saying he might be the next Janan Luwum, the former Archbishop of Church of Uganda, who was killed by government operatives on February 16, 1977.

The Archbishop, who described the misleading information as unfortunate and terrible, told Museveni that he was recruiting wrong people as informants.

Dr. Lwanga said some of the informants were dismissed from the Church and now shine as saints before the president.

He appealed to President Museveni to reach out and find out the truth. He also asked the President to be kind enough and tell them the Church leaders he has recruited in ISO, ESO or CMI.

Lwanga, who doubles as the Chairperson of Uganda Joint Christian Council (UJCC), told the recruited clergy that they cannot serve in the church and security.