England with capital Banjul relocated to Africa in Commonwealth brochure 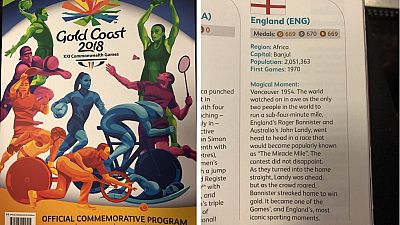 Reports emerged this morning of how England was geographically displaced and given a new capital city in a Commonwealth Games brochure.

The games which are underway in Australia’s Gold Coast mixed-up details of The Gambia with that of England. Incidentally the former gained independence from the latter 1965.

According to the official brochure of the 21st Commonwealth Games, England was located in the Africa region, its capital was Banjul or rather had changed to Banjul. And its population was only a little over 2 million.

There was an overprint. We found out about it maybe 10 days ago. We went and spoke to England and said, 'Congratulations, the Commonwealth's changing and it has since Brexit, and you are now a part of Africa.'

Users of social media platform Twitter expressed funny views about the print and new facts. Most people chose to look at the lighter side of the incident accepting the new facts as “correct.”

The AFP news agency quotes chief executive of the Gold Coast Games, Mark Peters, as saying admitting the mistake but also looking at the light side.

“There was an overprint. We found out about it maybe 10 days ago. We went and spoke to England and said, ‘Congratulations, the Commonwealth’s changing and it has since Brexit, and you are now a part of Africa’” he said.

Commonwealth Games 2018: ENGLAND LISTED AS PART OF AFRICA in programme blunder.
Brexit appears to have pushed England out of Europe and into Africa – if the official programme for the Commonwealth Games is to be believed. England's capital is listed as Banjul: Gambia. How Stupid. pic.twitter.com/YzvVxVU5AR

England has become part of Africa and London is no longer the capital, its Banjul. ? https://t.co/RA0vjurui0

Oh dear #GC2018 ?? So England is in Africa and capital is now Banjul according to Australia ?? you had ONE job ?? pic.twitter.com/P97GMxo9e3

Someone made a mistake : England has accidentally been named as an African nation in the official Gold Coast Commonwealth Games opening ceremony program. The 130-page program lists England as being a country of about 2 million people with the capital in “Banjul”. pic.twitter.com/kKVeJV4K8N

If you don't like the idea of England being ruled from Banjul ?? a city thousands of miles away… how do you think the rest of the Commonwealth felt about it? pic.twitter.com/1nGEgL5yXc

Someone didn't proofread the #GC2018 #openingceremony program too closely. Claims #England is in Africa, Capital is Banjul and population of 2 million cc _youhadonejob1 pic.twitter.com/zoAKJA5SZj