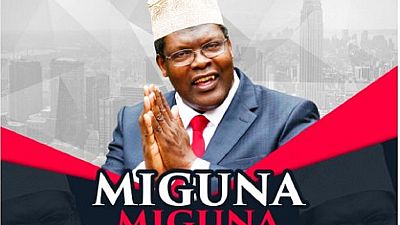 Kenyan opposition politician Miguna Miguna has issued an appeal from Dubai where the government forcibly deported him to.

In a message posted on his Facebook page, the lawyer said he was stranded in Dubai and needed the authorities back home to send him his Kenyan passport so that he can travel back home.

Wednesday evening’s deportation was the second such in under two months. He was first deported to Canada in February when he played a key role in a mock swearing-in by opposition chief Raila Odinga.

I don’t have any travel document or passport. I need Kihalangwa and Matiang’i to deliver my Kenyan passport to me here in Dubai tomorrow, March 30,2018 as multiple courts have ordered them to do so that I can use it to travel to Nairobi immediately?

Government at the time said he had denounced his Kenyan citizenship and was holding a Canadian passport. Miguna’s lawyers secured court orders asking government to facilitate his return to the country.

In a much publicized return early this week, the government insisted on arrival that Miguna applies for a visa which he flatly refused to, stressing that at no point had he denounced his Kenyan citizenship.

He was held for two days at the Jomo Kenyatta International Airport (JKIA) amid scuffles with security authorities. A court ordered him to be produced on Wednesday but the police and immigration chiefs failed so to do instead he was reportedly dragged, drugged and deported to Dubai.

The Milimani Court on Thursday slapped the Interior Minister, the Immigration and Police chiefs with fines in the region of $2,000 for defying the courts orders. The said amount was to be deducted directly from their next salaries.

Meanwhile, opposition and human rights groups have slammed the government for its handling of the matter. Media rights groups have also expressed worry over how some journalists covering the standoff had been mistreated by security agents.