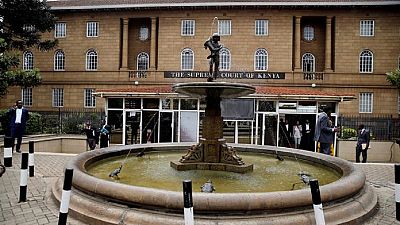 The High Court in Kenya has summoned three senior government officials to explain the ongoing stalemate over the detention and citizenship status of opposition politician Dr. Miguna Miguna.

‘‘He who leaves the court with an order must be assured that it will be affected unless they apply to have it overturned.The respondents have defied the court order. The matter is stood over until 2pm,’‘ Justice George Odunga ruled.

He who leaves the court with an order must be assured that it will be affected unless they apply to have it overturned.The respondents have defied the court order.

Miguna, a top ally of Raila Odinga, was deported over his role in Raila’s mock inauguration but his lawyers managed to secure a court order asking government to facilitate his return.

When he arrived at Jomo Kenyatta airport in Nairobi on Monday, immigration authorities insisted that he had to apply for a visa which he refused to do stating that he was a citizen by birth. A standoff ensued as he was held at the airport overnight.

He also refused to sign citizenship documents provided by the Immigration Department on Tuesday.

Meanwhile Miguna’s supporters have taken to the streets in the opposition stronghold of Kisumu, to protest his continued detention at the airport.

The protesters, some of whom wore T-shirts with labels of “resist”, a slogan marketed by Miguna to promote defiance against Jubilee government, chanted “No Miguna, No peace!” and carried placards demanding justice for the lawyer.

The standoff is likely to negatively affect the recent reconciliation between opposition leader Raila Odinga and Kenyan president, Uhuru Kenyatta.