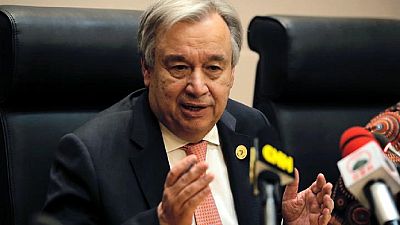 The United Nations has welcomed the signing of the African Continental Free Trade Area (AfCFTA), congratulating the leaders upon creating one of the world’s largest trading blocs with over 50 countries.

In a statement issued by the global body’s secretary general, Antonio Guterres, the United Nations said the move is important towards achieving the sustainable development goals and delivering the African agenda on peace and prosperity.

‘‘With the joint African Union – United Nations Agreement for the implementation of Agenda 2063 and the 2030 Agenda for sustainable development, as our common framework, the entire United Nations family stands ready to support the continent as it forges forward the entry into force of the Continental Free Trade Area in the coming months,’‘ read part of the statement.

The entire United Nations family stands ready to support the continent as it forges forward the entry into force of the Continental Free Trade Area in the coming months.

44 countries signed the agreement establishing the African Continental Free Trade Area, while 43 heads of state signed the Kigali declaration for the launch of AfCFTA and 27 signed protocols relating to Free Movement of Persons, Right of Residence and Right of Establishment.

Reluctance over ‘Free Movement of Persons’?

The AU Protocol on the Free Movement of Person paved the way for citizens of different member states to be issued with African passports in future and establish businesses anywhere in Africa.

The AU has set a 2018 deadline for the removal of visa requirements for all African citizens in all African countries.

Rwanda eased its travel restrictions starting January this year by allowing travellers from across the world to get a visa-on-arrival, a move adopted in Kenya for Africans.

Governments now have the next six months, by September this year, to ratify the protocol. Those that did not sign can also do so during the window.

Under the protocol, member states are required to remove visa requirements for Africans, allow 90-day stay, and right of residence for any African in a territory other than his or her country of origin.

The protocol also calls for issuance of African passport in corroboration with the AU.