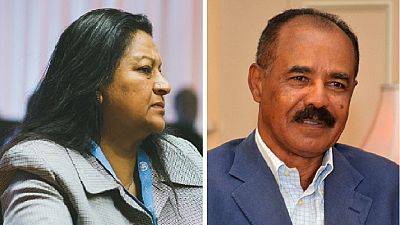 Eritrean authorities detained hundreds of perceived opponents this month after a school director who defied government orders died in custody, the United Nations said on Wednesday.

Most of those arrested were males and some were as young as 13, Sheila B. Keetharuth, the U.N.’s Special Rapporteur for human rights in Eritrea told a U.N. Human Rights Council meeting in Geneva.

The leaders of the country in the Horn of Africa should be tried for crimes against humanity including torture, rape, murder and enslaving hundreds of thousands of people, a U.N. investigation set up by the Council said in 2016.

Reports reaching me ... point to the arrest of hundreds of people, mainly males, some of them children as young as 13 years, after the burial of Haji Musa.

President Isaias Afwerki has led Eritrea since independence from Ethiopia in 1991 and his government operates a policy of compulsory military service that thousands each month flee the country to escape, according the United Nations.

There was no immediate comment from the government on Wednesday. In 2016, the government rejected the allegations and said they were an attempt to harass the country.

This month’s arrests followed the death in custody of Haji Musa Mohamednur, 93, who was a director of a private Islamic school in the capital Asmara and a respected elder, according to a U.N. statement.

He and other members of the school’s administration were arrested last October for defying government orders including enforcing a ban on the veil and stopping religious teachings.

“Reports reaching me … point to the arrest of hundreds of people, mainly males, some of them children as young as 13 years, after the burial of Haji Musa,” the statement quoted Keetharuth as saying.

Young Eritreans arrested over funeral of man who died in prison https://t.co/3i2AWoodRU

The statement gave no details of the circumstances of Musa’s death this month. In October, there was a similar wave of detentions when law enforcement officers violently broke up a crowd and arrested over 100 people including students, she said.

“The indiscriminate mass arrests in October 2017 and during the past week were carried out to quell any kind of protest or resistance,” she said.