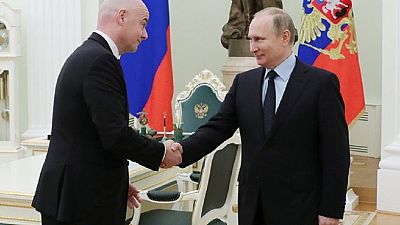 President Vladimir Putin played football with Fifa boss Gianni Infantino in the Kremlin on Tuesday as Russia marked 100 days before the start of the World Cup.

The footage was released by football’s world governing body in a tweet featuring legends of the beautiful game juggling the ball and doing tricks.

The clip ended with Putin heading the ball back to Infantino after a heavily edited kickabout set to Rimsky-Korsakov’s Flight of the Bumblebee.

Some people just can't wait for the greatest show on earth.

“Some people just can’t wait for the greatest show on earth,” Fifa said in the tweet.

Brazil’s Ronaldo juggled the ball by the beach while Sweden’s Thomas Brolin had his fun in the snow.

Putin is best known for learning to skate and playing ice hockey with government officials and Russian veterans of the winter sport.

But the judo black belt is a sports fanatic who is hoping to use the World Cup to showcase Russia and boost its image at a time of frail relations with the West.

Russia is hosting its first World Cup on June 14-July 15 in 11 host cities stretching from its western exclave of Kaliningrad near Poland to Yekaterinburg in the Urals.

Numerous Russian cities are planning events to commemorate 100 days before the start of the 32 team tournament.

Moscow is staging an open air concert for 6,000 volunteers while Russia’s northern capital Saint Petersburg is unveiling a countdown clock.

“It is important to show Russia the way it really is: open, hospitable and modern,” Sports Minister Pavel Kolobkov was quoted as saying on Tuesday by RIA Novosti.

Meanwhile, thousands upon thousands of Africans have celebrated the World Cup Trophy Tour in their countries.

The #WorldCup Trophy Tour made a successful return to the host country of the 2010 finals the past few days!

The FIFA World Cup Trophy Tour by Coca-Cola is a rare opportunity for fans to see the Original Trophy up close and have their experience captured with a photograph. The initiative started in 2006 is an exciting and exclusive experience since the Trophy is otherwise only displayed at the FIFA World Football Museum in Zurich, during the FIFA World Cup Final Draw and at the final match of every FIFA World Cup.