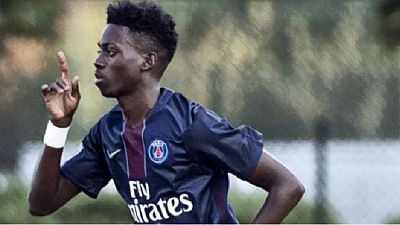 Timothy Weah, son of the legendary African footballer and now Liberian president, George Weah has made his senior debut with Paris Saint – Germain, nearly 23 years since his father’s last game with the French club.

The 18 year old striker helped PSG win two goals to nil against Troyes, a win that restored the club’s 14 point advantage at the top of the Ligue 1 standings.

And he nearly scored too.

It could've been the dream start for PSG's Timothy Weah!

A good save, or should he have done better there? pic.twitter.com/G4YIW2wKdP

Timothy Weah joined PSG in July 2017, signing a contract that will see him saty at the club till 2020.

Born in New York city on February 22, 2000, Timothy Weah represented the United States (USA) in the U-17 FIFA World Cup last year. He scored a hattrick in a game where USA demolished Paraguay by five goals to nil.

George Weah who was elected president of Liberia in December last year, played for PSG between 1992 and 1995, scoring 55 goals for the club.