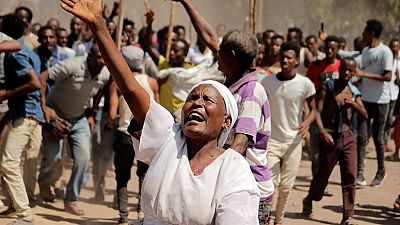 The United States embassy in Ethiopia said on Saturday it disagreed with the government’s decision to impose a state of emergency to calm political unrest the day after the prime minister’s surprise resignation.

The statement came after the council of ministers imposed yet another six months nationwide state of emergency last night, which defence minister Siraj Fegessa, said would include a ban on protests and publications that incite violence.

‘‘We strongly disagree with the Ethiopian government’s decision to impose a state of emergency that includes restrictions on fundamental rights such as assembly and expression,’‘ the statement said.

We strongly disagree with the Ethiopian government's decision to impose a state of emergency that includes restrictions on fundamental rights such as assembly and expression.

The prime minister’s resignation followed a wave of strikes and demonstrations successfully demanding the release of more opposition leaders.

‘‘We recognise and share concerns expressed by the government about incidents of violence and loss of life, but firmly believe that the answer is greater freedom, not less,’‘ it said.

Under a previous state of emergency, declared in October 2016 and lasting 10 months, thousands of Ethiopians were arrested by the military.

The current state of emergency has to be approved by the national parliament, which is currently on recess, giving the council 15 days to enforce the emergency rule until parliament reconvenes.

The statement urged the government in Ethiopia “to rethink this approach and identify other means to protect lives and property while preserving, and indeed expanding, the space for meaningful dialogue and political participation that can pave the way to a lasting democracy.”