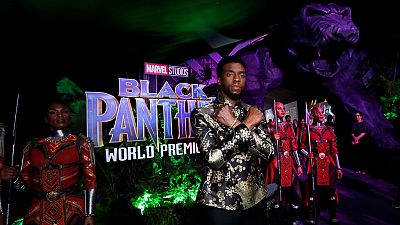 Africans can’t get enough of the first Marvel superhero movie with a predominantly black cast.

Black Panther has received rave reviews from critics and cinema goers who have flocked to its’s premieres in Nigeria, Uganda and South Africa among others.

Some of the cast actually flew down to South Africa for the premiere, with Kenyan born actress Lupita Nyong’o, tweeting that ‘the excitement is spellbinding’.

The people who made the film were very specific about the references they used in relationship to Africa. They are pulling from the best fashion and art.

A gift to be back in the motherland to bring #BlackPanther here for the South African Premiere. The joy, love and excitement here and worldwide is spellbinding. Something really special is happening! #WakandaForever #BlackPantherSA pic.twitter.com/8MibrXxzC3

In Nigeria’s commercial capital, Lagos, film fans, Nollywood stars and comics mingled at the screening of the movie.

Most people were dressed in traditional Nigerian robes and gowns, with some opting to wear specially made attire in keeping with the film’s futuristic take on African garments.

“Black Panther is a film that celebrates black excellence. Bringing it to Nigeria is especially exciting,” said Bolaji Kekere-Ekun, a 33-year-old filmmaker.

“The people who made the film were very specific about the references they used in relationship to Africa. They are pulling from the best fashion and art,” he said.

Black panther is set in the fictional African nation of Wakanda. It tells the story of the new king, T‘Challa/Black Panther (Chadwick Boseman), who is challenged by rival factions.

The fictional African country is depicted as a verdant land with stunning waterfalls where spacecraft designed like tribal masks soar over a modern metropolis.

Directed by black director Ryan Coogler and featuring actors including Michael B. Jordan, Angela Bassett, Lupita Nyong‘o and Forest Whittaker, the film has received widespread critical acclaim after years of criticism about the under-representation of black people in Hollywood.

Ugandans who have two actors with roots in the East African country featured in Black Panther, Daniel Kaluuya and Florence Kasumba, have been showing why Wakanda is actually Uganda.

When u watch Black Panther…look out for location on globe..Its not a coincidence Wakanda rhymes with Uganda and our guy is called O“Wakabi” and u see Murchison falls and rift valleys and impenetrable forests and mountains of the moon! Come vacation in Wakanda/Uganda. https://t.co/4vOVUUHo1N

The young one of a Uganda is a Wakanda….after all Wakanda is a fictional East African nation bordering Uganda, might as well be our baby. ?? #BlackPanther #WakandaCameToSlay

“As it turns out, the filmmakers, prod. designers, & costumers of Marvel’s #BlackPanther imagined Wakanda as an amalgamation of real African nations, economies, & cultures, including Nigeria, Kenya, Uganda, South Africa, & the Congo.”???????????https://t.co/kdHJ32ZRzS

Oscar-nominated Daniel Kaluuya looking like the king he is in a Kanzu, traditional wear for men in Uganda, at the world premiere of #BlackPanther ? pic.twitter.com/vP09nCqO4W

With some scenes from the movie shot on location from Mountain Rwenzori and Bwindi Impenetrable National Park, in Southwest Uganda, who can blame them for staking their claim.