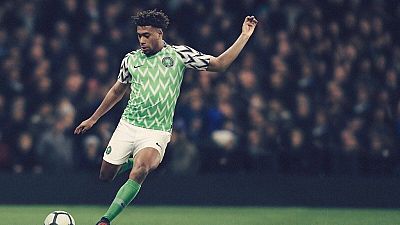 Nigerians have taken to social media to celebrate the unveiling of the official Nigerian jersey to be used at the World Cup in Russia.

The unveiling of the green white and black geometric design kit by sports brand Nike was applauded for daring to steer away from the white and green stripped kits that the Super Eagles have always donned.

The #WorldCup kits for the Nigeria ?? Super Eagles were unveiled yesterday in London, with the help of the likes of 67Kelechi alexiwobi and wizkidayo #SoarSuperEagles. pic.twitter.com/2zwnQUP7T5

The new kits that were modeled by Nigerians stars including musician Wizkid and Arsenal’s Alexander Iwobi, are strikingly similar to those donned by the Golden Generation of the ’90s which saw the Super Eagles win the Africa Cup of Nations and shine at the 1994 World Cup.

The new Nigeria jersey – not for the hungover pic.twitter.com/fy3Z96Q0RY

Nigeria Worldcup kits… my ovaries ?
Thanks to NIKE for saving us from the regular green & white jersey… #GoSuperEagles ?? pic.twitter.com/b9rXl1q8Oj

Great jersey for the Super Eagles. It’d be a shame if fans couldn’t buy them [easily] in Nigeria though.

The World Cup in Russia is just a few months away and teams have been unveiling their new kits for fans to admire and purchase ahead of the golbal showpiece.

Nigeria along with Egypt, Morocco, Senegal and Tunisia will represent the Confederations of African Football at the tournament in June this year.