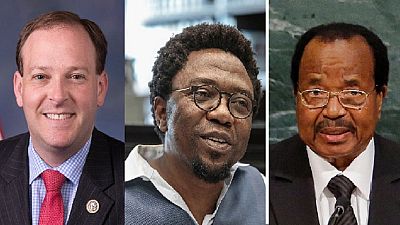 A United States Congressman has taken the happenings in Cameroon’s restive Anglophone region to the House of Representatives (HOR) seeking a formal condemnation of Yaounde’s handling of the crisis.

The resolution chronicled a series of events from January last year when Cameroon government placed a communication blackout on its English-speaking regions after clashes with separatists.

It continues with issues relating to the use of force to restrict freedom of expression especially after October 1, 2017 – when separatists decided to declare the independence of a breakaway Ambazonia republic.

It decried how rights of media and political opponents were being clamped down upon. Stressing how different groups including the UN had called on the government to avoid the use of force on peaceful protests.

On the subject of Patrice Nganang, it summarized his arrest, detention and subsequent deportation accusing the government of delaying his public hearing and failing to issue a warrant of criminal charges.

Congressman Zelden’s submission was titled: “Condemning the actions taken by the Government of the Republic of Cameroon against Patrice Nganang and others, and for other purposes.” It has since been referred to the Committee on Foreign Affairs for further action.

What has become known as the ‘Anglophone Crisis’ is at a stage where armed separatists have been launching deadly attacks on security forces. One of its prominent leaders, Julius Ayuk Tabe is currently before the judicial authorities after he was deported from Nigeria.

The U.S. embassy, the United Nations, United Kingdom, Commonwealth and other bodies have called for dialogue to resolve the security crisis which has largely led to a humanitarian situation as thousands flee into Nigeria.

The Central African country heads to the polls later this year with incumbent Paul Biya expected to seek a mandate extension.