Pendjari National park in Benin bounces back to life 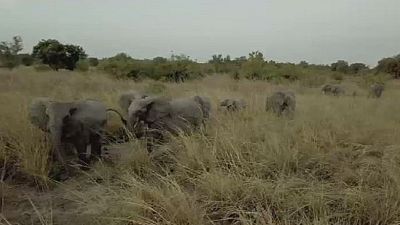 Sitting in the back of a pick -up from the Pendjari National Park, in northern Benin, Matthieu Yoa smiles with the satisfaction of the work accomplished: with his rangers colleagues, he has just put a satellite collar on an elephant to ensure its protection.

“It was very strong,” he breathes in hesitant French, visibly moved.

Although his native village is located only a few kilometers from this huge 4,700 km2 national park, this 23-year-old had never seen wild animals until two months ago.

The preservation of the elephant at the Pendjari and WAP level is certainly an asset for all protected areas in West Africa since they may eventually be repopulated in the future with elephants that will have preserved here.

He was working as a mason when he read in the local paper that African Parks, an NGO dedicated to the protection of nature and who recently managed the Pendjari Park, recruited about sixty guards. Out of 1,700 candidates, he is one of 35 students selected for the first class.

After six weeks of training, he knows how to put an elephant on the ground for a quarter of an hour to put a necklace and give the species a chance to survive in West Africa.

This extremely delicate operation is supervised by a South African veterinarian, Pete Morkel, who came specially to Benin to glue a dozen elephants and lions.

“We are mobilized to a satellite GPS collar on a better idea of ​​the movements in the park and a bigger park area. And also obviously for better security. They are poaching elephants and we want to know where they are best, to provide them better security” ,Pete said.

Tracked for nearly an hour by an ultralight aircraft, then by two pickups, the beast collapsed the tall grass with a numbing arrow shot. Awake a few minutes later, she immediately joined her flock, a little groggy, with her new collar.

There are nearly 1,700 elephants in the park. It is the highest density of pachyderms in West Africa. Particularly threatened for the trade of its ivory, the protection of the elephant is now at the heart of the policy of management of the park.

“The preservation of the elephant at the Pendjari and WAP level is certainly an asset for all protected areas in West Africa since they may eventually be repopulated in the future with elephants that will have preserved here “ , said Jean-Marc Froment, Conservation Manager of African Parks NGO.

The Pendjari park wants to double its population of animals in 10 years.

In addition to the rhino, the wild dog should also be reintroduced.

The adventure is just beginning for the new rangers.