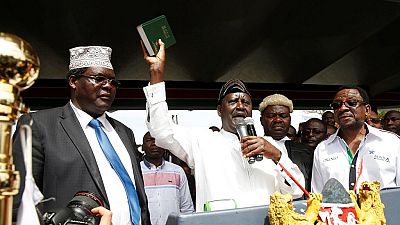 According to a special gazette notice issued today under the Prevention of organized Crimes Act, the government declared as follows:

“IN EXERCISE of the powers conferred by section 22 of the organized Crimes Act of 2010, the Cabinet Secretary, Ministry of Interior and National Government declares National Resistance movement (NRM) to be organized criminal group for the purposes of the Act.”

The NRM was created by NASA as a resistance wing of its activities. It comprises Odinga’s Orange Democratic Movement (ODM), WIPER, FORD-Kenya and Amani National Congress (ANC) – the major players in NASA.

The statement issued by Fred Matiangi comes a day after Odinga – a former Prime Minister and leader of NRM defied security and legal cautions to take an oath of office as President of the Republic of Kenya.

The mammoth event took place at the Uhuru Park in the capital, Nairobi. Odinga signed an oath administered by a Commissioner and immediately change his social media accounts to reflect his new status.

The government had earlier declared the Uhuru Park out-of-bounds but Odinga faithful from across the country converged to participate in the event. It was, however, overshadowed by the lack of attendance by some top members of the National Super Alliance (NASA) Coalition.

Today’s development is the result of a political struggle that started in August 2017. Raila and incumbent Uhuru Kenyatta went into presidential polls which Kenyatta won according to the elections body, IEBC.

The Supreme Court in a landmark ruling annulled the elections after NASA proved that the process was not clean. But NASA withdrew from a scheduled rerun in October. Kenyatta won that vote by a landslide despite low turnout.

Odinga and NASA launched the NRM and planned a People’s Assembly under its #RESIST banner. An initial swearing in last December was postponed to today.