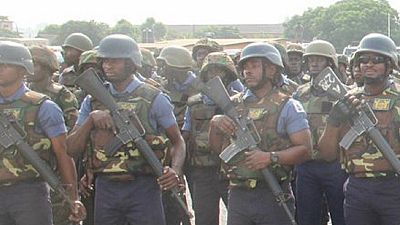 Police in Ghana are still hunting for armed robbers who attacked a district police headquarters in the capital killing an officer and freeing persons held in the facility.

A statement from the police said contrary to media reports that the fugitives had been arrested, they were still engaged in active pursuit of the criminals who attacked the Kwabenya District Police Headquarters.

Local media reported that the police heirachy visited the scene of the incident where there were bloodstains. Officers at the post reports added remained in a state of shock following the incident.

A police release said the escapees consisted of six Ghanaians and a Nigerian. There are no reports of how many armed robbers were involved in the attack that ended up freeing the seven. They have shared photos of the seven people and asked the public to volunteer any information that could lead to their arrest.

Ghana is a relatively stable country in a West African region threatened by terrorists. The country’s security concerns are however mounting.

“Police is investigating the matter in coordination with the relevant agencies and therefore assures the public to remain calm. Police is continually working to ensure public safety,” a police statement said.

In an update on the particular topic police said in a tweet: “Suspects Ismaila Ali Musah, Abdul Karim Yakubu and Osman Hassan have been remanded by an Accra District Court to reappear on 30th January, 2018. They have been charged with the offence of possession of explosives.”