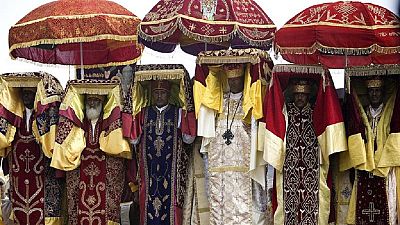 Thousands of Ethiopian orthodox worshippers gathered across the East African nation on Friday (January 19), to celebrate the Epiphany. A festival that commemorates the baptism of Jesus Christ according to the ancient Orthodox calendar.

The colourful festival, also known as Timket is one of the oldest and most important observed religious festivals in Ethiopia.

Church leaders carry representations of the box built by Moses to house the 10 commandments known as the Ark of the Covenant, as worshippers sing and dance in the streets.

This year’s celebrations were more pronounced compared to the 2017 edition when the country was under a state of emergency imposed to quell anti-government protests.

Local tour operators last year expressed feared that the political unrest would scare away visitors, who usually come in great numbers during the festival. This year also tourists returned to have a feel of the festivities.

Ethiopia is one of the oldest Christian nations in the world. Despite the growing influence of Islam and evangelical churches in the country, the traditional Orthodox Church remains strong.