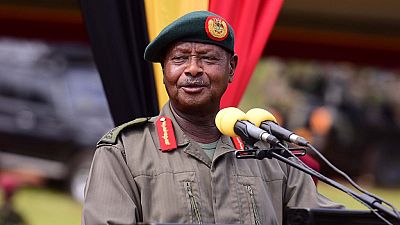 Ugandan president Yoweri Kaguta Museveni has made pronouncements about execution of criminals.

According to him he was reconsidering an earlier position of not signing death warrants that were presented to him.

Museveni, 73, said his Christian background had informed his decision to withhold signing death warrants but recent events had forced him to “revise” his position.

“On the death penalty, I have not been assenting to hanging of convicts because of my Christian background but being lenient is causing people to think they can cause harm and get away with it. I will revise my position,” he wrote on Twitter.

He had earlier delivered an address during the graduation of over 900 prisons officers at the country’s Luzira Prisons Training Academy on Thursday. The graduating class included 706 warders and wardresses and 213 non-commissioned officers.

To the graduands, you are going out to a tempting world. Avoid sexual promiscuity (umalaya) which could cause you to lose your life. Avoid alcohol. Don’t be corrupt because you might become an inmate instead of a warder. pic.twitter.com/iUuBH2TR6j

Most countries across Africa only have the death penalty on their death books but they are hardly implemented. Most presidents commute death sentences to life imprisonment.

Egypt was the most recent case in Africa after 15 people were hanged for their role in terrorist attacks in the country’s Sinai region. In Nigeria, the penalty is reserved for kidnappers – the crime is rampant in the country.

Tanzanian president John Pombe Magufuli for his part, told prison authorities not to bring warrants to him because he cannot give the final orders for a human being to be killed.

“I know there are people who convicted of murder and waiting for death penalty, but please don’t bring the list to me for decision because I know how difficult it is to execute,” he said in September 2017 whiles swearing in a new chief justice.