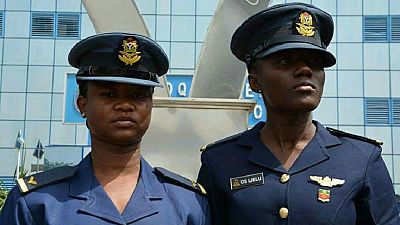 The Nigerian Air Force (NAF) on Wednesday welcomed 11 young pilots into its fold. Out of the 11 were two females and nine males.

The National Helm portal gave the names of the two females as Flying Officers OS Ijelu and GC Nwaogwgwu.

The Air Force disclosed that the history-making duo were winged as female combatant officers who qualify as pilot on fixed wing aircrafts.

By the end of February therefore, the NAF would have successfully winged 72 pilots. Furthermore, there are an additional 74 pilots that are training to qualify for awards of NAF wings.

The NAF said in a statement on its Facebook page that 11 pilots had recently completed their one year flying training course at Westline Aviation, South Africa.

In his opening address at the graduation ceremony which took place in the capital, Abuja, the Chief of the Air Staff (CAS), Air Marshal Sadique Abubakar, said the two female pilots made the ceremony a unique one.

He said it “was the first time in the history of the NAF that female Regular Combatant officers would be decorated with wings as qualified pilots.” He further disclosed that by February 2018, 14 more pilots, 10 from the International Aviation College, Ilorin and 4 from South Africa, would complete their flying training.

“By the end of February therefore, the NAF would have successfully winged 72 pilots. Furthermore, there are an additional 74 pilots that are training to qualify for awards of NAF wings. Out of this number, 64 are training in Nigeria while the remaining 10 are training outside Nigeria,” the CAS said.

The NAF has also trained 23 Instructor Pilots in the last 2 years while 7 are currently undergoing training abroad with 3 in the US and 4 in Jordan, according to him.

The Air Force in Africa’s most populous nation is actively involved in the fight against terrorism especially in the northeast Borno State where Boko Haram insurgents operate.

They also joined security operations in the southeast last year at the height of Biafra secessionist agitations. Nigeria also has an Air Force training school in the north central Kaduna State.