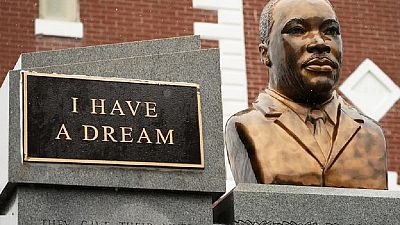 50 years after he was assassinated, all American states on Monday celebrated the golden jubilee anniversary of his death.

Most Americans have been using the Twitter hashtags #MartinLutherKingDay #MLKDay to remember the black rights movement leader and preacher.

One such persons is legendary boxer Muhammad Ali. Ali died in June 2016 at the age of 74. Beside his exploits in the ring, he was also known to have a political and civil rights side that landed him in jail at a point.

The official twitter handle celebrating the life of Ali’s life and legacy tweeted a photo of the two leaders. It added a quote by King: “Our lives begin to end the day we become silent about things that matter.”

“Our lives begin to end the day we become silent about things that matter.” – Martin Luther King, Jr. #MLKDay pic.twitter.com/52137MiFCw

King was fatally shot on April 4, 1968 in Memphis, Tennessee, he was killed at the age of 39. He preached the use of nonviolence and civil disobedience to fight oppression and injustice. His ‘I have a dream,’ speech is widely quoted and reenacted across the world.

“Dr. King’s dream is our dream. It is the American Dream. It’s the promise stitched into the fabric of our Nation, etched into the hearts of our people, and written into the soul of humankind.” pic.twitter.com/tyUZGTecDY

Dr. King was 26 when the Montgomery bus boycott began. He started small, rallying others who believed their efforts mattered, pressing on through challenges and doubts to change our world for the better. A permanent inspiration for the rest of us to keep pushing towards justice.

Today, we commemorate my father’s 89th birthday. Beyond sharing #MLK quotes, I pray that our global community, from educators to politicians to artists to law enforcement, will truly hear his voice, follow his teachings and demonstrate his love for humanity. #MLKDay #MLK50Forward pic.twitter.com/9B7bhiKWzr

50 years after Dr. King’s last birthday, it’s up to all of us to keep his Dream of a Beloved Community alive: don’t demean and belittle, inspire and empower; don’t isolate and abuse, embrace and serve.

So I’m happy, tonight. I’m not worried about anything. I’m not fearing any man.” #MLKday pic.twitter.com/ecyziqpRCI