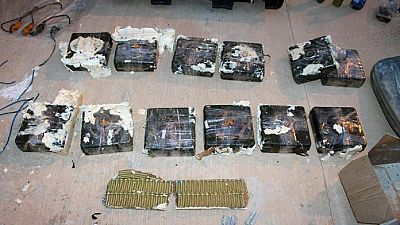 Greek authorities have seized a Tanzanian-flagged ship heading for Libya and carrying materials used to make explosives, the coastguard said on Wednesday.

“The materials were headed to Libya,” Rear Admiral Ioannis Argiriou told reporters. He said the material could be used “for all sorts of work, from work in quarries to making bombs and acts of terrorism”.

The materials were headed to Libya,for all sorts of work, from work in quarries to making bombs and acts of terrorism

This is the second Tanzanian – flagged ship that is falling foul of the law in recent weeks after another vessel was intercepted by Dutch Naval forces. 1,600 kilos of cocaine were found on the ship.

European Union and United Nations-imposed arms embargoes have prohibited the sale, supply or transfer of arms to Libya since 2011.

According to the ship’s bill of lading, the cargo had been loaded in the Turkish ports of Mersin and Iskenderum and was destined for Djibouti and Oman.

But the coastguard said a preliminary investigation found the captain had been ordered by the vessel’s owner to sail to the Libyan city of Misrata to unload and deliver the entire cargo.

No shipping maps were found on the ship’s logbook for the Djibouti and Oman areas, the coastguard said.

The eight-member crew has been arrested and are expected to appear before a prosecutor.