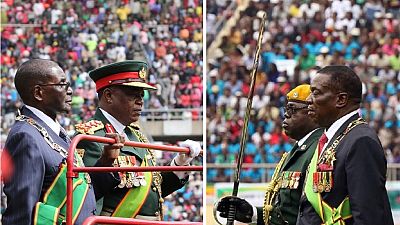 Today December 21, 2017 marks exactly a month since Robert Gabriel Mugabe resigned as president of Zimbabwe. A country that he had been in charge of for 37 years.

Mugabe rose to power after playing a key role in the country’s independence struggle. After independence from the British in 1980, he was elected Prime Minister, a post he held for seven years.

He was elevated to president in 1987 and has held the position till the events of November this year which held to his ouster. Mugabe, 93, is said to have resigned under pressure after the army took over the reigns of power and placed him under house arrest.

As part of our 2017 Review, we look back at 10 key words that defined the ‘last political’ moments of the world’s longest serving democratically elected president.

Mugabe fired his the first vice-president Emmerson Mnangagwa for disloyalty, it was believed that the move was to pave the way for his wife Grace Mugabe to be nominated to fill the post. Mnangagwa fearing an attempt on his life fled to South Africa.

He had manages to leave but his supporters back home were being attacked politically. The army called on Mugabe at a press conference to halt the purge of Mnangagwa allies – persons they said had partaken in the liberation struggle.

“The current purging of which is clearly targeting members of the party with a liberation background must stop forthwith. The known counter-revolutionary elements who have fermented the current instability must be fished out,” General Chiwenga said in the presence of over 90 army chiefs.

At a press conference, General Constantino Chiwenga, said if the purge continued, there were ready to step in.

“Unfortunately since the turn of 2015, Zanu PF’s protocol and procedures have changed with a lot of gossiping, backbiting and public chastisement being the order of the day … We must remind those behind treacherous shenanigans that when it comes to matters of protecting our revolutions, the military will not hesitate to step in,” Chiwenga said at the time.

His views received a heavy response from the ruling ZANU-PF’s youth league who said there were ready to die to defend the constitution and that the army would be wrong to step into politics.

The army finally announced a takeover after seizing the state broadcaster and other key public buildings. The flatly refuted that the move was a coup against Mugabe. The president and his family were fine.

“We wish to assure the nation that His Excellency Mugabe and his family are safe and sound and their security is guaranteed. We are only targeting criminals around him who are committing crimes that are bringing social and economic suffering in the country in order to bring them to justice,” Sibisuso Moyo, the major general who announced the takeover said.

Allied to the takeover was talk of house arrest, that Mugabe’s movement had been restricted by the army who had subdued members of the presidential guard and taken over the security of Mugabe. It appreared that he now needed their clearance to move around.

Mugabe, two days after the takeover, will be allowed to attend a graduation ceremony in the capital Harare. A move that political watchers said was meant to dampen talk that their action was an outright coup.

Neighbouring South Africa quickly sent emissaries to ascertain the facts on the ground and to engage the parties in Harare. Mugabe on one hand, the army chiefs on the other. A famous Catholic priest in the country was also involved in the talks.

The regional political bloc, the SADC, also met in Botswana and later Angola over the impasse with the view of flying to Harare. At a point it was reported that former Zambian president, Kenneth Kaunda, had been sent to talk Mugabe into stepping down.

A defiant Robert Mugabe makes his first appearance since being placed under house arrest by the Zimbabwe military https://t.co/4B3qZrZBIV pic.twitter.com/AZy8z69voB

In the midst of the talks and diplomatic overtures, the ruling party for the first time convened a meeting of the highest decision making body to recall Mugabe as its leader and first secretary. It also voted to expel Grace Mugabe as a member of the party.

Incidentally, the man that Mugabe had fired weeks back, Emmerson Mnangagwa, was elected the new leader of the party.

Citizens from across the southern African country then united in protests calling for the 93-year-old leader to step down after 37 years. Members of ZANU-PF and the opposition flooded the streets with placards demanding that Mugabe steps down.

The army still in talks with Mugabe stated expressly that they were in support of the protests. They had since the takeover taken over the routine traffic duties of the police and had tanks stationed in the capital Harare. They were hailed by protesters as heroes of the nation.

Zimbabwe’s parliament then moved in to use legislative processes to remove Mugabe, days after he addressed the nation but did not step down as was widely expected.

The lawmakers in a joint sitting agreed to start impeachment processes against Mugabe. The move was initiated by the ZANU-PF who hold a parliamentary majority and it was bound to succeed with an opposition that were for the motion.

On the day that the parliament was due to vote on the impeachment, a leader signed by Mugabe and delivered to the speaker of parliament said Mugabe had accepted to step down as president of Zimbabwe.

I, Robert Mugabe, in terms of section 96, subsection 1 of the constitution of Zimbabwe, hereby formally tender my resignation as president of the Republic of Zimbabwe with immediate effect, the letter read in part.

Weeks after he was fired by Mugabe, Mnangagwa was back in town. The man who once feared for his life was assured of enough safety and political goodwill to return home. He returned to a rousing welcome.

The country witnessed Mnangagwa’s swearing in ceremony in Harare as he took over the political reigns of Zimbabwe. Only the second president since 1980. He will see out Mugabe’s term till elections slated for next year. Unlike Mugabe, he can only have two terms in office via the ballot box.