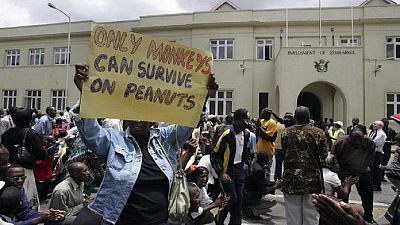 President Emmerson Mnangagwa’s government continues to drive remarkable reforms in a bid to revive the flailing economy and win over the support of Zimbabweans and much needed investor confidence.

As the ruling ZANU-PF party holds an extraordinary congress this week, Mnangagwa is expected to select his two vice presidents who many hope will be young and fresh candidates with no ties to the Mugabe era.

The new minister for agriculture in Mnangagwa’s government dominated headlines today when he ordered people who have illegally occupied farm lands to leave immediately.

“All those who were illegally settled or who just settled themselves on resettlement land should vacate immediately.” Perrance Shiri is quoted to have said.

The move could see a return of at least 4,000 white farmers who were evicted in 2000 in a controversial and often violent land reform programme led by former President Robert Mugabe.

Meanwhile, on social media, Zimbabweans are reacting to a media report that the Secretary to the Treasury has proposed to pay December salaries of all civil servants by 21st of the month, beginning with the Army, Air Force and Health officers who are to be paid on December 15.

#Zimbabwe a sign things could be changing … for the 1st time in a while civil servants and pensioners getting paid on time this month pic.twitter.com/uKUBaczSgR

The payments would mark a positive shift from the past; in July 2016, the Zimbabwe government experienced a shutdown when nurses and teachers laid down their tools over unpaid salary arrears while the army was reported to be in a foul mood during the same period over delayed salary payments.

The ZANU-PF congress is expected to endorse Mnangagwa as the presidential candidate for next year’s elections and the president will be hoping that such reforms will be adequate ton convince the voters to elect him to his first full term in office on a reformist agenda.