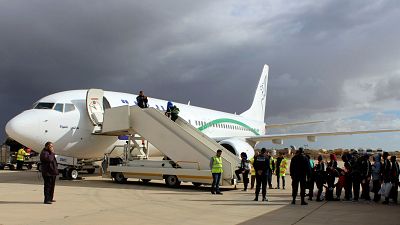 The United Nations migration agency is stepping up the rate at which it flies migrants home from Libya, aiming to evacuate up to 15,000 in the final month of the year.

The acceleration of returns is an attempt to ease severe overcrowding in detention centres, where numbers swelled after boat departures for Italy from the smuggling hub of Sabratha were largely blocked this year.

It also followed a CNN report showing migrants being sold for slave labour in Libya, sparking an international outcry and calls for migrants to be given safe passage from the country.

The International Organization for Migration (IOM) has already flown back more than 14,500 migrants to their countries of origin so far this year as part of its voluntary returns programme. Nigeria, Guinea, Gambia, Mali and Senegal have seen the highest numbers of returns.

Migrant flows through Libya surged from 2014. More than 600,000 crossing the central Mediterranean to Italy over the past three years, but departures from Libya’s coast dropped sharply in July when armed groups in Sabratha began preventing boats from leaving.

After clashes in the western city in September, thousands of migrants who had been held near the coast surfaced and were transferred to detention centres under the nominal control of the U.N.-backed government in Tripoli.

“We are seeing an increasing number of migrants wishing to return home especially after what happened in Sabratha, it’s all linked to Sabratha,” said Ashraf Hassan, head of the IOM returns programme.

In the aftermath of the CNN report and an African Union visit to Libya, some countries of origin have begun accepting charter flights returning migrants from Libya for the first time.

The IOM has shortened procedures for screening migrants Libya, collecting less statistical data and focussing on trying to ensure that migrants will not be put at risk by returning, Hassan said.

The agency hopes to have three charter flights leaving per day by Dec. 11, increasing that to five flights by Dec. 15.

On Tuesday nearly 400 migrants were flown back to Nigeria on two flights from Tripoli, the capital, and from the western city of Misrata.