How can Africa achieve a sustainable future for the youth? This is the question Let’s Turn the Page, an organization that promotes democratic change, is trying to answer on the sidelines of the AU-EU Summit.

And like their name suggests, a new chapter of democracy is the key to development.

Their belief is that poorly elected leaders can’t solve problems in their countries.

We want to ask for example that Libya is suspended from the African Union because that is not normal. We want a salary upgrade that will enable Africans to live with more than a dollar a day at least.

“Kabila, whose term ended in 2016, is determined to stay in power and represses demonstrations by people who simply demand for a presidential election,” Olive Ndong,
Let’s Turn the Page – Gabon.

“We know that there have been hundreds of deaths, you think he is entitled to represent the Congolese people, to speak on their behalf? We all know how the presidential election took place in Gabon in August 2016, we had Ali Bongo cheat the election, the report of the European Union seriously doubts this election” she added.

With a gross domestic product of 36 billion dollars as of 2016, and poverty rates that have climbed to over 50 percent, majority of Ivorians struggle to afford a decent livelihood.

The Pan-African Congress for Justice and Equality ties these problems to demands and conditions set by the west. They say as long as African leaders remain dependent, they will not be able to solve challenges their citizens face.

Professor Hyacinthe Nogbou from the Pan-African Congresses for Justice and Equality said, “we want to ask for example that Libya is suspended from the African Union because that is not normal. We want a salary upgrade that will enable Africans to live with more than a dollar a day at least.”

But a strengthened education system, effective economic policies and access to social services, can reverse these challenges. 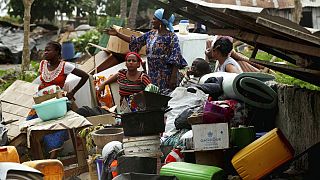