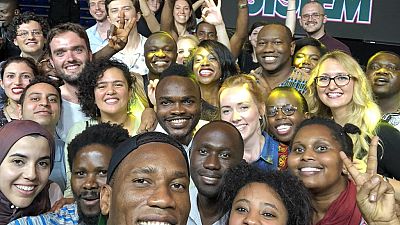 Drogba, 39, has been engaged in a series of activities preceding the main summit which starts November 29 – 30, 2017. Among others shooting adverts, engaging in advocacy and joining a musical concert by one of the country’s biggest groups, Magic System.

His main engagement is working with the 36 African and European youth leaders who are expected to present a common position on youth challenges to Heads of State at the summit.

Together for youth, with youth. didierdrogba celebrates with the #AUEUYPII fellows and MagicSystemOffi in #Abidjan. The #AUEU Summit kicks off this week. pic.twitter.com/UNnLrIQLUv

Youth issues are at the heart of the summit whose theme is ‘INVESTING IN THE YOUTH FOR A SUSTAINABLE FUTURE.’ The youth leaders’ engagement is dubbed the Youth Plug-In Initiative (#AUEYYPII)

The former Chelsea and Marseille forward has held meetings with top officials of the E.U. and A.U. and as at Wednesday morning was part of a meeting attended by E.U. foreign affairs chief, Federica Mogherini.

Aside youth issues, African leaders are expected to discuss migration especially in the wake of slave sale footage from Libya. The video showing Africans been sold has caused outrage across the continent and beyond. Security and terrorism is also another area to be discussed.

Footballer didierdrogba supports the Youth Plug-In Initiative which brings together 18 Europeans and 18 Africans to act as youth ambassadors for the next #AUEU Summit → https://t.co/PJICKDt98h #aueuypii eu_eeas pic.twitter.com/LNCvq0b988