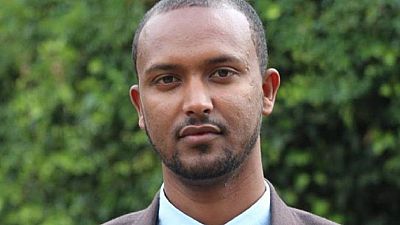 The Ethiopian Supreme Court has reduced the prison sentence of activist and former Ethiopian opposition party Semayawi (Blue Party) spokesman, Yonatan Tesfaye from six years and six months to three years on Monday according to his lawyer.

Yonatan Tesfaye was charged and convicted of “associating with a terrorist organization” after criticizing the government on his Facebook account.

The Supreme Court reduced his sentence because his lawyer, Shebru Belete Birru, argued that he should not have been prosecuted and convicted under the Anti-Terror Law but should appear before a common law court.

"using force against the people, rather than engaging in a meaningful dialogue with the people".

Imprisoned since 28 December 2015, Yonatan Tesfaye was accused of seeking “to harm the social, economic and political stability of the country”.

The Addis Ababa Federal Court had also accused him of colluding with the Oromo Liberation Front (OLF), a rebel armed group.

In one of the Facebook messages cited by the court, the young man accused the ruling coalition, the Ethiopian People’s Revolutionary Democratic Front (EPRDF), of “using force against the people, rather than engaging in a meaningful dialogue with the people”.

His post referred to the repression suffered by the Oromo ethnic group when they embarked on massive demonstrations that shook the Oromia region in November 2016.

Yonatan Tesfaye, an Oromo, is a member of a younger generation of activists determined to challenge the authoritarian regime that has ruled Ethiopia since the fall of Mengistu in May 1991.

The anti-terrorism law in Ethiopia, according to human rights defenders and the UN, is a tool used to silence critics of the government.