Mnangagwa says had contact with all Zimbabwe security chiefs during impasse 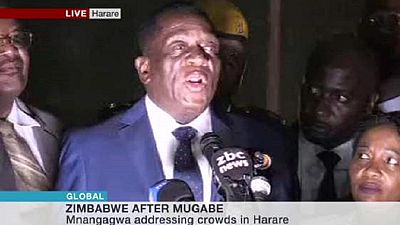 Emmerson Mnangagwa, Zimbabwe’s exiled former vice-president says he maintained contact with all security chiefs back home during his brief exile in South Africa.

Mnangagwa, who is expected to be sworn-in as the next president of Zimbabwe on Friday, returned to the country on Wednesday, barely 24 hours after his former boss, Robert Mugabe, resigned as president.

He was addressing a cross-section of teeming supporters at the headquarters of the ruling, ZANU-PF, in the capital Harare. He thanked the army chief Constantino Chiwenga and his men for saving the country.

“Exactly 16 days ago I received a letter firing me from government of the republic of Zimbabwe as vice-president within two hours I was informed about plans to eliminate me,” his address said in part.

As a former head of the intelligence agency, most political and security watchers had maintained that he was behind the army’s action which led to mass protests calling for Mugabe to step down.

He was fired by Mugabe over allegations of ‘disloyalty’ and an indecent haste to succeed the 94-year-old who till November 21, 2017 was the only political leader of the southern African country.

Mugabe served as Prime Minister (1980 – 1987)soon after independence from the British. He has been president for the last 30 years and held the title as the world’s oldest political leader.