Necrophiliac killer arrested in US 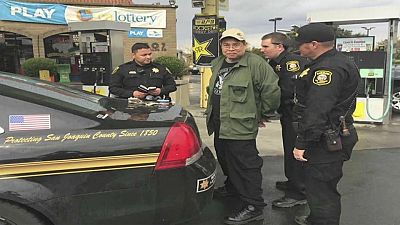 A manipulative “psychopathic predator” who Hawaiian prosecutors describe as having “all the criteria of a classic serial killer” has been arrested thousands of miles away in California.

Randall Toshio Saito escaped from a mental hospital in Oahu four days ago.

How did he escape?

No alarms were triggered when Saito walked out of the mental hospital on Sunday morning.

The 59-year-old used a mobile phone to call a taxi, gave his name as Bill and asked to be taken to the airport in Oahu.

He then caught a connecting flight to Maui before taking a Hawaiian Airlines plane to San Jose in California, according to reports.

AG Chin: “This is a dangerous individual. We need him off the streets. The State is in close contact with law enforcement to make this happen.” pic.twitter.com/VWnMjtwDce

How did he get caught?

Saito was arrested more than 2,500 miles away in San Joaquin County in California.

Police say he was arrested on Wednesday morning on a highway in Stockton, California.

The authorities believe he was heading for his brother’s home.

San Joaquin County Sheriff’s deputies arrested psychiatric patient Randall Saito today with the help of a tip received from an alert taxi cab driver. Saito was arrested in the area of Highway 99 and Waterloo Road in Stockton. https://t.co/uRShxlhehQ pic.twitter.com/MKEk0zrOu6

Source tells me escapee Randall Saito booked a roundtrip ticket under the alias Alvin Pimento. He never boarded his flight back to #Hawaii. Instead was captured this morning in #Stockton. More on CBSSF at 11pm. pic.twitter.com/t5Km5i6G9M

Is there an investigation?

Yes. As news of Saito’s disappearance broke, employees at the hospital were being scrutinised. Officials are looking at evidence he had help getting out.

The alarm was not raised for nine hours.

The Hawaii State Department of Health says seven of its employees are off-duty without pay for 30 days pending the result of an internal inquiry into Saito’s escape.

Officials say more may be taken off-duty as the inquiry proceeds.

Why was he in a secure unit?

Time magazine says he shot and stabbed a woman to death in 1979.

He met her at random in Hawaii’s biggest shopping mall, the Ala Moana Center.

He was eventually found not guilty of murder by reason of insanity and was committed to the mental facility on Oahu.

During his psychological investigation, officials reportedly deemed him to be a sexual sadist and necrophiliac with a sexual attraction to corpses.

According to the Associated Press news agency, Saito is the reason why Hawaii’s attorney general ruled in 2003 that mental patients do not have a legal right to conjugal visits while in custody.

Officials learned that Saito had been escorted home for visits for two years.

“He is a psychopathic predator whose mental condition continues to represent a serious danger to the community,” – Deputy Prosecuting Attorney Jeffrey Albert.