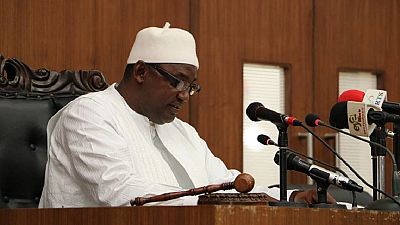 The Gambian police has revoked the permit granted to a pressure group planning to demonstrate on Sunday against the electricity and water crisis in the country.

The #OccupyWestfield group which was denied a permit a week ago and later permitted to hold the demonstration had threatened to sue the government for denying them their constitutional rights.

The police announced the revocation of the latest permit on Saturday, hours after the sack of the Interior Minister Mai Ahmad Fatty who had met the organisers of the demonstration to dialogue.

The president said in a statement that the minister has been “redeployed to the diplomatic services” and his position has been temporarily assigned to the Minister of Justice Abubacarr Tambadou.

This action by the police is necessitated due to security intelligence report which has posed security concerns ... Anyone found wanting will be dealt with according to law.

The president did not give reasons for the minister’s sack.

The police said in its statement that the demonstration poses security concerns and advised the organisers and the public to desist from taking part in the process.

“This action by the police is necessitated due to security intelligence report which has posed security concerns … Anyone found wanting will be dealt with according to law,” the police said.

The leader of the #OccupyWestfield group Alieu Bah condemned the decision of the police and compared their action to that of ousted ex president Yahya Jammeh’s regime.

“IGP and govt of the gambia. y’all took the constitution into your own hands like jammeh use to do. and all of you who are rejoicing at this have shown clearly that we are not yet ready for a democracy, for the constitution to take its place in the fitness of things,” he said on Facebook.