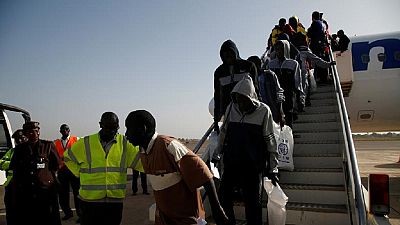 According to the minister, the return of the current contingent takes the total figure of returnees to 1,467. The tiny west African nation is a known origin of migrants seeking to reach Europe via Libya.

A similar contingent of returnees were received at the Banjul International Airport in April this year. The Minister added that the government was going to offer them relief services to help them resettle.

Young Gambians have often attempted the perilous journey because of tough economic conditions back home.

Aid agencies and rescue outfits have often reported about death of migrants in the Mediterranean. Rebel groups are also known to be keeping some of these migrants under very harsh conditions in poorly run centers.

Meanwhile, The Gambian government has entered a deal with the European Union in the area of irregular migration. Interior Minister Mai Ahmad Fatty signed the 3.9m euro deal on behalf of the government.

Other sub-Saharan Africa countries that contribute huge numbers to illegal migrants include Nigeria and Eritrea. Most Nigerians have also voluntarily returned home from Libya in the last few months, local media has often reported.