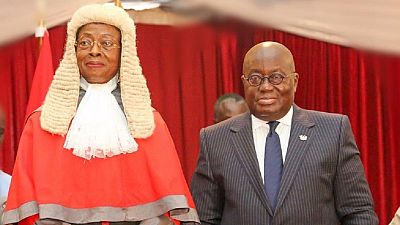 Judges in Ghana have been ordered by the Chief Justice to wear wigs during the discharge of their duties, local news portal Starrfmonline reports.

The directive from her Ladyship Justice Sophia Akuffo said effective Wednesday November 1, 2017, all judges had to wear their wigs without fail.

Debate around the wigs has been ongoing in Ghana with most people describing it as outdated and a colonial hand-down that did not have to be enforced. The judicial service, however, says the move is meant to cure a ‘creeping culture of casualness in the system.’

Her Ladyship the Chief Justice has directed that, with effect from 1st November, 2017, all judges are to wear wigs during Court sittings.

An October 23, 2017 memo signed by the judicial secretary read in part: “Her Ladyship the Chief Justice has directed that, with effect from 1st November, 2017, all judges are to wear wigs during Court sittings.”

The wigs, the memo added was to also restore the formal nature of the court proceedings and to provide the needed security and anonymity for judges. It added that they will serve to preserve the uniqueness of the members of the bench.

In Ghana, Supreme and Appeal Court judges are always seen fully robed with their wigs when conducting their duties. Same cannot be said of most High Court and Circuit Court judges much less for magistrates.

Chief Justice Sophia Akuffo is Ghana’s second female head of the judiciary. She took over from Ghana’s first female Chief Justice, Georgina Theodora Wood, who retired after a decade as head of the third arm of government.

The Chief Justice is the fourth most powerful person in Ghana behind the president, his vice and the speaker of parliament.